El Salvador is the smallest country in Central America and has one of the highest population densities in the region, with over 300 inhabitants per square kilometer. Along with Guatemala and Honduras, it also ranks among the poorest countries in the Americas, according to the United Nations organization UNICEF. Over 40% of Salvadoran children live in poverty.

In addition, the country suffers severely from the consequences of climate change: drought and forest fires destroy areas used for food production, while hurricanes and floods wreak widespread havoc. Degraded soils and increasing urban sprawl pose a threat to water and food supplies.

Ricardo Navarro’s small non-governmental organization CESTA (Salvadorian Center for Appropriate Technology) has been fighting for decades for greater climate and environmental protection and a sustainable future in El Salvador. Thanks to the perseverance of the NGO, various laws have been adopted, such as the ban on continuing metal mining.

A central point of CESTA’s activities is to teach small-scale women farmers the concepts of organic farming and how to obtain seeds from local varieties. Women produce mainly for their own use and earn extra money by selling their surplus.

Objective of the project : CESTA is one of the first small organizations in the world to receive support from the German Federal Ministry of the Environment (BMU) to expand its climate engagement under the IKI Small Grants Program. One of the axes of the CESTA program is support for women, in particular through environmental education. In total, the IKI Small Grants program supports micro-projects for climate and nature conservation in 27 developing and emerging countries.

Project partner: The IKI Small Grants program is implemented by the Deutsche Gesellschaft für Internationale Zusammenarbeit (GIZ) GmbH on behalf of the BMU.

Project duration: The project in El Salvador started in May 2021 and will run for two years.

A film by Caroline Chimoy 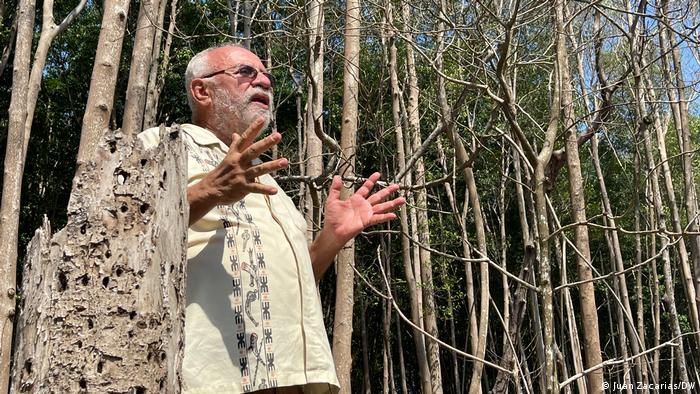 Ricardo Navarro, founder of CESTA, has already made a big difference in the field of environmental protection in El Salvador